Why you should back up your mobile devices 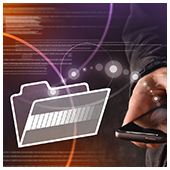 Almost every modern mobile device allows you to send and receive emails, download and upload media files, store data, and even close business deals. As mobile devices have become indispensable in everyone’s personal and professional life, the security risks have also increased — and backing them up has become more critical than ever.

More than two-thirds of the world’s population use a mobile phone with internet connection, so dangers in these handy devices are to be expected. Scarier than the thought of being offline is being online and exposed to malware.

If you use your mobile devices as extensions of your work computers, backing them up is a must. Mobile phones have become as vulnerable to malware as laptops and desktops are, especially if you consider the fact that many professionals and business owners use them for emailing confidential documents and storing business-critical files.

Malware isn't the only disaster that can hurt your smartphone. Because you carry it wherever you go, your device can easily be stolen, misplaced, or damaged. They may be easily replaceable, but the data they contain is not. Here are some security threats to look out for:

Performing backups on iOS and Android devices is a quick and painless process. For example, companies that use Office 365 or Google's G Suite enable company-wide backup settings from a single dashboard. Apple's backup settings usually need to be configured on each device, but it's a pretty simple process.

There are also robust third-party options to back up all your organization’s mobile devices. The best of these are cloud backup services that sync devices and back up contacts, photos, videos, and other critical files in one neat system. These mobile backup tools are offered on monthly or lifetime subscription schemes, which provides small businesses with enough flexibility to ensure long-term protection.

Our experts can provide practical advice on security for your business’s computers and mobile devices. Call us to ask about mobile backup and other security solutions today.